AN OLD DISCOVERY WITH A MODERN EXPLORATION APPROCH

The McMurdo property is a regional grassroots exploration target, generated in-house by Trailbreaker’s exploration team. The property covers 1,728 hectares (4,258 acres) of highly prospective ground located in the northern Purcell Mountain range of southeast British Columbia. The property is located 30 kilometers southeast of Golden, BC and can be accessed via maintained forest service roads or by helicopter based in Golden. It is 100%-owned by Trailbreaker Resources with no underlying royalties or payments.

The property has a rich history of discovery and small-scale mining spanning from the 1890s through to the early 1900s. Mining was focussed on high-grade gold veins and strata-bound polymetallic Pb-Zn-Ag replacement type mineralization. Though several prospectors and geologists have examined the numerous historical gold showings on the property over the decades, this is the first time modern exploration methods have been employed to identify the gold potential of the McMurdo area.

The property overlies Precambrian marine sediments of the Horsethief Group within a regional scale anticlinorium that is deformed by faults and folds and intruded by the Cretaceous Battle Range suite. The property was extensively explored for shale-hosted lead-zinc SEDEX deposits in the early 1980s with significant prospecting, mapping and geochemical sampling programs. Gold mineralization was vastly overlooked during this time frame and most of the geochemical samples were not assayed for gold.

In the summer of 2020, Trailbreaker Resources conducted a limited first pass program of prospecting and geochemical surveying at the McMurdo property to confirm the presence and grades of historic gold-bearing quartz-sulphide veins and to evaluate the vein density for a potential bulk tonnage model.

The program was successful in both extending historical gold showings and confirming high-grade gold mineralization in quartz veins. This includes in situ and float rock samples that assayed up to 175.9 g/t (5.13 oz/t) gold from its newly expanded “Crown Point” zone. A total of 33 soil samples and 74 rock grab samples were collected during the program.

The Crown Point zone comprises a 400m x 300m area that contains auriferous quartz veins hosted in a micaceous grit unit. This area has been exposed following roughly 700m of glacial retreat since the turn of the 20th century, which provided company geologists with the opportunity to significantly expand the known historic mineralized zone. The quartz veins range from a few centimetres to 3m in width and contain irregularly disseminated pyritic mineralization throughout. The confirmed high-grade gold values in quartz veins highlights the potential for significant precious metal mineralization in the area.

The area was first prospected in the late 1800s for gold and then shortly after for lead, zinc, and silver. The first gold discoveries were made in the early 1890s, and a small stamp mill was built on Decision Creek to treat gold ore obtained from the Burns and Dutchman mining leases. The present McMurdo property covers the former Burns mining leases and quartz-sulphide veins. At about the same time, the Crown Point prospect, comprising lead-zinc-silver replacement style mineralization, was discovered at the headwaters of McMurdo Creek. This prospect was periodically mined until the 1940s with a total of 762 meters of underground workings. Several minor gold showings were also discovered near the former Crown Point mine at this time.

In 1966, West Gate Mines completed the most recent documented exploration program focusing on gold in the area. West Gate’s work consisted of prospecting and re-sampling of historical workings, and recommended diamond drilling to follow up on results.

Commencing in the late 1970s, the area underwent regional exploration over a period of several years for SEDEX-style lead-zinc mineralization. A significant amount of geological, geochemical and geophysical surveying was completed, followed by exploration diamond drilling. Only a small portion of this work was completed on the McMurdo property, and most of the geochemical samples were not assayed for gold.

First Nuclear Corporation conducted a reconnaissance program of geological mapping, prospecting and geochemical sampling over an 18 km area of the northern Purcell mountain range. The program results suggested there was potential for stratiform lead-zinc deposits in the area. The prospecting conducted on the McMurdo property returned elevated gold and silver grades from grab samples obtained from carbonate lithologies, even in the samples that contained low base metal content.

Samim Canada Ltd optioned the property and continued exploration for stratiform lead-zinc deposits as a follow-up program for work completed by First Nuclear Corp. The programs included geological mapping, IP surveys, soil sampling, and 11 diamond drill holes. The majority of this work was not conducted on the McMurdo property.

In 1997 Mountain Star Resources Ltd acquired a large block of claims and conducted a property examination for lead-zinc SEDEX deposit potential as well as its potential to host more extensive auriferous quartz vein systems. Very limited field work was conducted on the property with no work being conducted on the McMurdo property.

The property is underlain by a thick sequence of Proterozoic marine sedimentary rocks exposed in the core of the northwest-trending Purcell Anticlinorium. This anticlinorium is deformed by a complex series of thrust faults and folds running parallel to the northwest-southeast trending axial trace. The rocks exposed on the McMurdo property belong to the Horsethief Creek group and comprise a series of prominent grit and quartzite sedimentary members separated by shales and minor carbonate units. The Cretaceous Battle Range Batholith intrudes the sedimentary rocks approximately 10 km southwest of the property. Gold mineralization occurs mainly as pyritic quartz veins that strike northwest and are steeply dipping to the northeast. The quartz veins are typically confined to the coarser grained grits and quartzites. Replacement style lead-zinc-silver (Pb-Zn-Ag) mineralization is confined to the more finely textured carbonate and shale units. 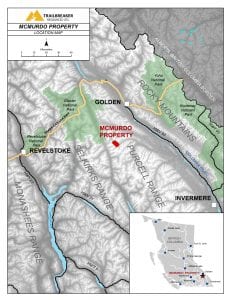 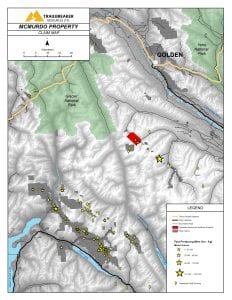 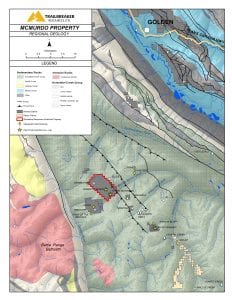 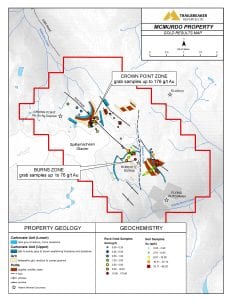 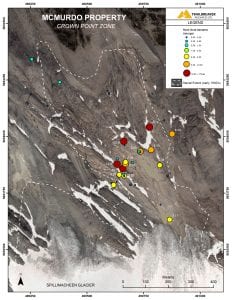 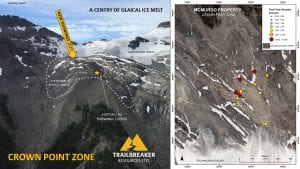 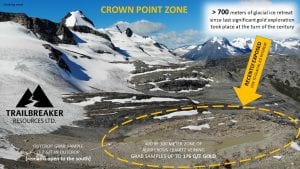 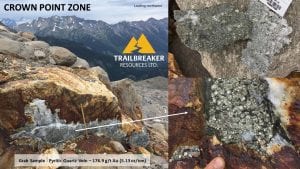 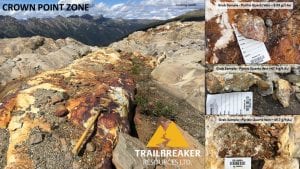 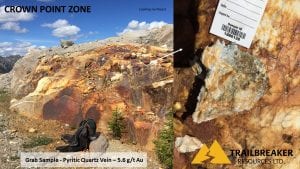 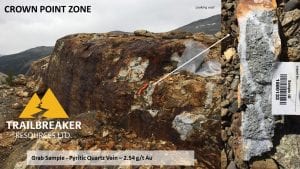 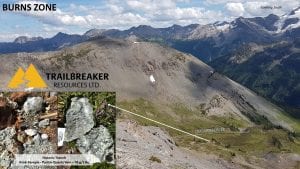 Clik here for the Presentation PDF