AN UNDER-EXPLORED AREA IN THE RIGHT GEOLOGICAL SETTING

The Skelly property covers 2,526 hectares and is 100%-owned by Trailbreaker Resources with no underlying royalties or payments. It is located just south of the British Columbia-Yukon border, approximately 100 km southwest of Whitehorse, Yukon Territory. The property is contiguous to Bessor Minerals’ 8,178 hectare Golden Eagle property that contains significant drilled gold prospects with the dominant mineralization consisting of high-grade, gold-bearing quartz-sulphide veins. Exploration history dates back to the 1890s with old shafts providing the only evidence of past exploration. No documented modern exploration has been conducted on the majority of the Skelly property.

Skelly is situated in the northern-most end of British Columbia’s Stikine terrane that contains both the Stuhini volcanic package and a strong Au-As geochemical signature unique to the Golden Triangle district which hosts 188 M oz gold estimated reserves. This northern portion of the Stikine terrane is highly prospective for gold yet has seen far less exploration than other gold districts in BC. Trailbreaker’s exploration team believes this district has been overlooked and has strong potential to host similar gold deposits to that of the Golden Triangle district, 300 kilometers to the south. The property covers some of BC’s strongest Cu-Au-As-Sb government-collected stream sediment geochemical anomalies and resides in a geological setting with potential for epithermal, VMS, and intrusion-related gold deposits.

The property is located just south of the British Columbia-Yukon border, approximately 100 km southwest of Whitehorse, YT and 60 km northwest of Atlin, BC.  The South Klondike Highway (Hwy 2) runs through the northwest portion of the property providing excellent access from both the port city of Skagway, AK and Whitehorse, YT.

Exploration on the property dates back to the early 1890s with numerous gold-bearing quartz-sulphide veins discovered by prospectors passing through on their way up to the Klondike Gold Rush via the Chillkoot Trail. These old workings consist mostly of old exploration adits and shafts chasing high-grade gold-bearing quartz-sulphide veins and remain the only preserved record of early historic exploration.

Modern day exploration has occurred since the early 1980s with Dupont of Canada conducting a large-scale, regional prospecting and sampling exploration program in the area.

Regional stream sediment sampling completed by the Geological Survey of Canada outlined anomalous Au, As, and Sb in the Skelly area as well as an area parallel to the 100 km northwest-trending regional scale Llewellyn thrust fault.

Noranda Exploration was the first documented company to undertake drilling in the area.

Skelly sits along the eastern margin of a Late Cretaceous pluton within the Coast tectonic belt and the Mesozoic volcanic arc and is also underlain by metasedimentary rocks of the Intermontane belt.  The regional scale northwest-trending Llewellyn fault zone cuts the east side of the property and is believed to be associated with the numerous mineral occurrences in the area and responsible for the robust, regional scale Au-As geochemical anomaly outlined by regional stream sediment sampling.

The Skelly property has seen very limited modern exploration work to date. The mineralization at the Skelly property shares characteristics of both intrusion-related gold deposits and epithermal gold-silver deposits. The first pass reconnaissance prospecting program has discovered both high grade gold-silver quartz-sulphide veins and lower grade disseminated arsenopyrite in intrusive rocks. Select grab samples from quartz-sulphide veins in outcrop assayed up to 35.5 g/t gold and 1,147 g/t silver. Multiple auriferous veins have been sampled over a 180-meter shear zone that parallels the granite – metasedimentary contact. The shear zone and associated quartz veining remains open on surface with strong potential for additional veins to be discovered with detailed prospecting and soil sampling. 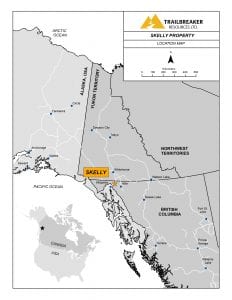 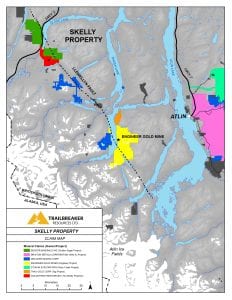 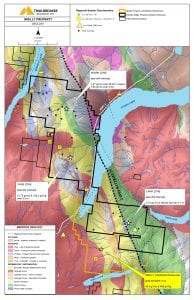 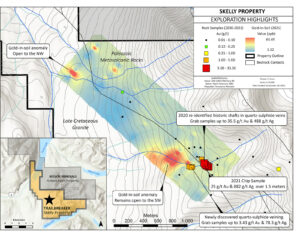 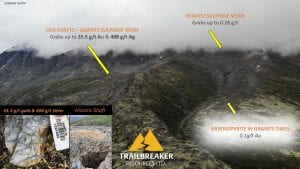 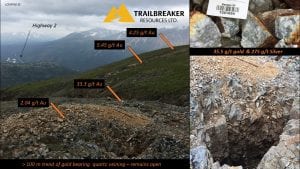 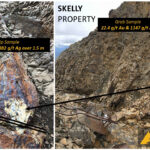 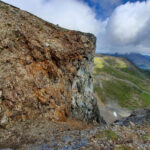 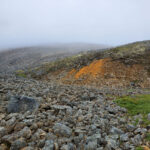 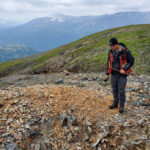 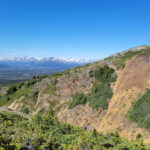 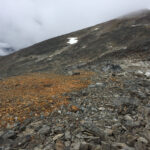 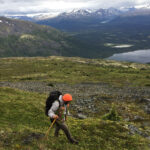 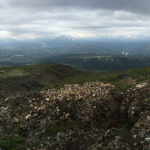 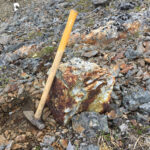 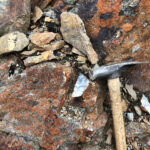 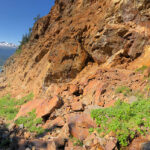 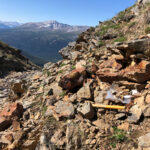 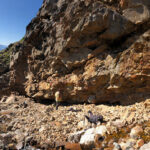